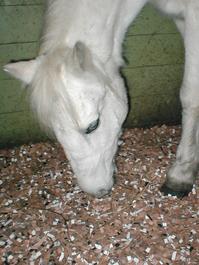 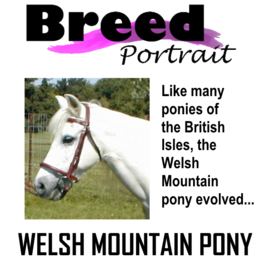 As with feed, bedding products can become contaminated with allergens when these materials are inadvertently exposed to the elements. Typically, straw and sawdust tend to be the most problematic types of bedding for horses with COPD. Baled and screened flake shavings that have been stored indoors are a widely-distributed, commercially-available alternative to straw or sawdust. However, shredded paper, cubed cardboard or peat moss are the best options for non-allergenic bedding.

Changes in management procedures can also reduce the amount of allergens that horses inhale. Avoid overfilling stalls and sweep bedding out from under feeders and hay racks at feeding time. Installing rubber matting can also reduce the overall amount of bedding needed. Rubber mats can be periodically cleaned and will not harbor harmful bacteria and fungal growth that can occur with soil or clay floors.

There is some discrepancy as to whether hay should be fed at shoulder height or on the ground. Feeding on the ground can increase the amount of allergens the horse inhales. However, it is more natural for horses to eat with their head down and in this position horses are better able to clear secretions from their lungs. Placing hay higher than shoulder height should be avoided as this allows dust and fine particles to drift down into the horse's field of respiration.

Horses who only exhibit symptoms during certain months of the year and whose symptoms get worse, not better with turn-out are most likely suffering from summer pasture-associated obstructive pulmonary disease or SPAOD. In this case, the associated allergens are pollen or fungus found primarily outdoors.

As with ROA, reducing the source of allergens is the first line of defense for minimizing symptom due to SPAOD. Keeping these horses indoors, particularly in mid to late afternoon when the heat and humidity are the highest, may be the best way to reduce further contact with allergens.

Most cases of COPD can be diagnosed with a physical examination by a veterinarian. Symptoms include coughing, nasal discharge and labored breathing. An increase in respiration rate, flared nostrils and a heave-line may also be observed in horses with this condition.

For short-term therapy, veterinarians often prescribe the use of corticosteroids to reduce inflammation and to prevent further damage to the lungs. Drugs, such as Dexamethasone or Dex, can improve lung function in as little as three days. Unfortunately these drugs also have serious side effects when used long term; especially when administer orally.

Bronchodilators, like atropine and clenbuterol, are also useful in the treatment of COPD. These drugs don't reduce inflammation, but work by relaxing the smooth muscles in the airways. Bronchodilators have less severe side effects than corticosteroids and are often used as a rescue medication when symptoms are severe or to open airways prior to exercise.

Overall, treatment for heaves involves a long-term commitment to reduce allergens, coupled with the use of medications as needed to reduce inflammation. The outcome for horses diagnosed with heaves can depend as much on the severity of the disease as it does upon the dedication of the horse owner!

The information contained within this article does not constitute medical advice. Consult your veterinarian for the diagnosis and treatment of COPD.

You're worried. Your horse appears bright and alert. He's eating, drinking and dirtying his stall. Yet he has a runny nose, a cough and is breathing hard, even when you ride him lightly.

Your most trusted equestrian friend suggests your horse has heaves. But after examining your horse, your vet launches into an explanation of COPD, ROA, and SPAOD that left you wondering if you had fallen into a vat of equine alphabet soup. Confused? Rightly so.

Heaves is a layman's term that has been around for ages. It probably originated from the forced or heaved expiration that horses with this condition make as they expel air from their lungs. Heaves can also be known as broken wind, equine asthma, equine emphysema, or small airway disease.

One of the medical terms for heaves is COPD or chronic obstructive pulmonary disease. COPD is an inflammatory disease of the small airways (alveoli and bronciole) in the lungs. In response to allergens, these small airways thicken and produce mucous in greater amounts than normal.

ROA (recurrent airway obstruction) and SPAOD (summer pasture-associated obstructive pulmonary disease) are types of COPD. They both have similar symptoms, but the triggers and management are different for each.

Sawdust and shavings tend to be dustier and contain more allergens than bedding material manufactured from recycled paper or cardboard. 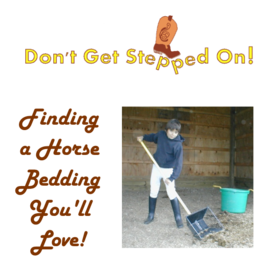 bacteria and mold spores due to environmental conditions during harvesting, transporting and storage. Likewise, round bales that are stored outdoors will contain more allergens than small square bales that have been protected from the elements.

ROA is caused by mold and dust that can be present in feed and bedding materials. Saccharopolyspora rectivirgula (formerly known as Micropolyspora faeni) is a bacteria commonly found in hay. It is responsible for causing Farmer's Lung disease in humans and is generally targeted as a possible trigger for COPD in horses. Aspergillus funigatus, also implicated as a COPD trigger, is a fungus that grows on organic debris.

ROA is commonly seen in stabled horses. Dust and spores from bedding and hay are inhaled, particularly when horses are eating. Viral respiratory diseases or ammonia from soiled bedding coupled with poor ventilation may predisposition horses to COPD. According to the Merck Veterinary Manual, approximately 12% of horses have some small airway inflammation due to allergens.

Treatment options for ROA start with management changes aimed at reducing the intake of allergens found inside the stable. Feed and bedding are common sources of these allergens. Overhead hay storage, indoor arenas and neighboring stalls can also contribute to a horse's exposure to dust, molds and bacteria. Housing horses outdoors with access to a run-in shed or similar shelter is one of the best ways to reduce their exposure to these allergens.

Whether horses are housed indoors or outside, changing the type of roughage an ROA horse receives can prevent further damage to the lungs. Grass, hay-replacement products, and pelleted complete feeds are preferred over baled hay. Baled hay generally contains more dust, 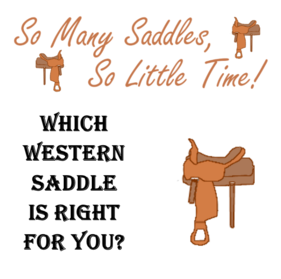 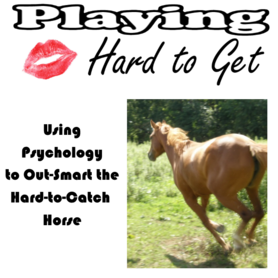 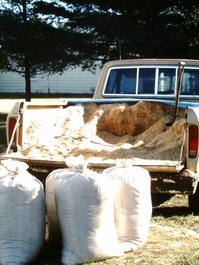