Above all else, don't allow the horse to make a game of being caught. Rewards should be given only after the horse is secured with a halter or neck-rope. If the horse is allowed to escape after receiving the reward, undesirable behavior has been reinforced. Likewise, following a running horse around a pasture for two hours only serves to reinforce in the horse's mind that it can evade capture. Habitually hard-to-catch horses should begin a retraining program in a small dry-lot or round pen where grazing is severely limited and eluding the owner is difficult.

Here are few other do's and don'ts: 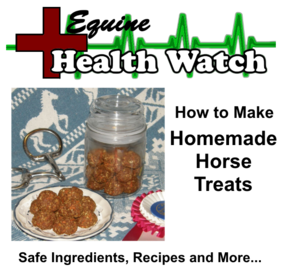 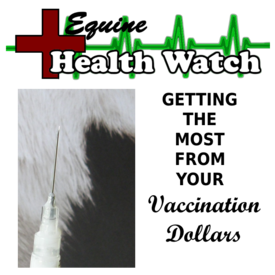 Using Psychology to Out-Smart the

Horses can get loose at horse shows and trail rides. It is essential to be able to catch them quickly.

A horse that has just been turned out may not be ready to give up its freedom, friends and food. 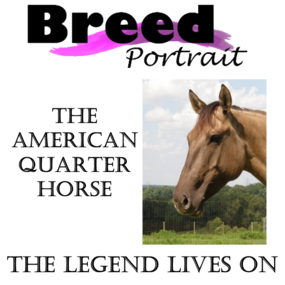 A handful of grass is an easy way to reward a horse.

Every time a horse is handled, his behavior is being modified. Sometimes, as in the case of catching a horse, behavior modification is unintentional. To understand how this occurs, let's consider the following scenario:

A horse is contently grazing in the pasture with his fellow herd mates. The horse is content because he's satisfying the two primary equine drives, eating and socializing. Now along comes the owner carrying a halter. From past experience, the horse has come to associate the approach of the halter-carrying owner with removal from food, friends and freedom. So the horse evades capture by moving away from the owner.

The horse's reaction is the direct result of behavior modification due to negative punishment. The horse evades capture because he doesn't want to be removed from something he finds desirable, much like the children don't want their toy taken away. ​ 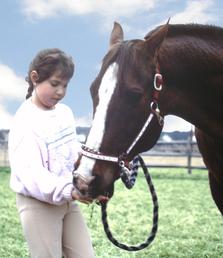 A SKILL THAT CAN BE TAUGHT 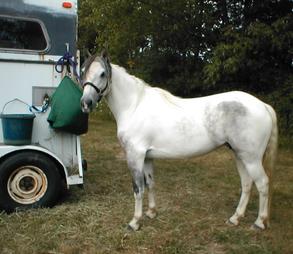 Once horse owners understand this principle, they can avoid those situations that inadvertently discourage the horse from wanting to be caught. To do this, it is essential to avoid linking experiences the horse may deem negative with removal from the pasture. To a horse, riding and training sessions as well as vet and farrier visits are far less desirable than the freedom experienced in the pasture. So if the intention is to work the horse, resist the temptation to immediately begin a training session as soon as the horse is caught. Instead, spend a few minutes grooming the horse or allowing it to eat. These are pleasurable experiences for the horse and he will link being caught with something that equals or exceeds the socialization or grazing opportunities in the pasture.

For habitually hard-to-catch horses, catch and release is one way to reprogram the horse into thinking that being caught does not automatically mean being removed from the pasture. To employ this technique, repeatedly approach the horse, halter it, then release it. It may be necessary to initially use this technique in a round pen or small pasture in order to have enough positive responses to effectively start the reprogramming process.

In addition, using positive reinforcement when catching a horse will help balance the negative experience of being removed from the pasture. It will also increase the effectiveness of the catch and release method of retraining. A scoop of grain can be used as a lure and works particularly well since grain rattles and makes an auditory sound that horses associate with feeding time. However, walking out into a herd of horses with a scoop of grain creates a safety risk, so other types of rewards are recommended in this situation. Positive reinforcement can be anything the horse might enjoy such as kind words, petting, a quick grooming, a handful of grass or small horse treat that can be hidden in the palm of the hand. 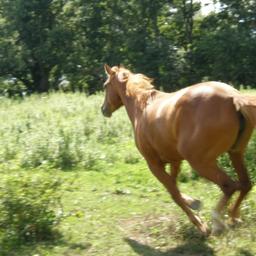 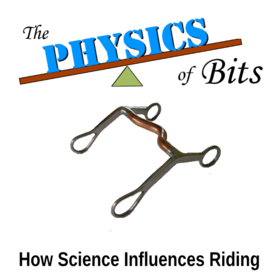 Reward good behavior! Make getting caught a pleasant experience for the horse. 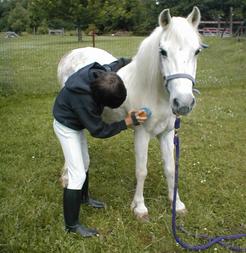 It's a perfect day for riding. You head to the barn, anticipating a good workout in the arena or a relaxing trail ride. Instead, you spend your entire riding time trying to retrieve your horse from the pasture. Although most horses will occasionally play hard to get, if you repeatedly spend more time trying to catch your horse than enjoying it, it's time for a change of strategy.

After all, having a hard-to-catch horse is more than just an inconvenience. Even with the best preventative measures, horses can and do get loose. Outside the safe confines of a fence, your horse could head onto the road or into your neighbor's vegetable garden. And the longer it takes to retrieve a loose horse, the more likely something bad will happen. Not only could your horse get injured or killed, but as the owner, you can also be held liable for property damages and injuries resulting from your horse's escapade.

For the occasionally hard-to-catch horse, negative reinforcement can be used to retrieve the horse from the pasture. Remember, in terms of operant conditioning this is not a type of punishment. Instead, pressure is applied to the horse until the desirable behavior is displayed. In this situation, the pressure is the presence of the horse owner.

The key to this method is to keep the horse moving at a walk. At this speed, the owner can keep up with the horse and therefore provides a constant pressure. At the same time, the pleasure the horse derives from grazing is greatly reduced as he is eating on the move. This method works best in small-sized paddocks and pastures where the presence of the owner can't be easily escaped by galloping to the far end. The horse will eventually give up by standing still and turning its head toward the owner. For safety reasons, loose horses should always be approached from their shoulder. So it may be necessary to walk in a semi circle to achieve this position.

DO'S AND DON'TS WHEN CATCHING HORSES

Like many skills, teaching a horse to accept being caught is part of his overall training. However, we may need to take a different approach with our horses when training this skill. To understand why, let's delve into the world of psychology and take a look at operant conditioning.

Operant conditioning, a term coined by B.F. Skinner over 75 years ago, denotes a type of training in which a behavior is modified through the use of consequences. Modern psychologists divide these consequences into four types. The most widely understood is positive reinforcement, in which an animal receives a reward for correct behavior. Types of positive reinforcement include verbally praising, patting or giving an animal a treat when they have correctly responded to a cue. Some species, like dogs, are very motivated to perform in the presence of certain types of rewards, such as food.

Most horse training techniques involve anther type of reinforcement. Psychologists term this method negative reinforcement because the animal performs in response to an unpleasant sensation. When we squeeze a horse's sides to cue him to move faster, we are applying pressure or an "unpleasant sensation." When we pull back on the reins to slow or stop the horse, we are also cuing him with pressure. The horse learns that when he makes the correct response, he will be rewarded with a release of pressure.

The term negative reinforcement should not be confused with punishment. In operant conditioning, punishment is an unpleasant sensation that is delivered after a behavior. For instance, a horse that bites a human, then receives a physical reprimand is being punished. Specifically, this technique is labeled positive punishment because the behavior is followed by the addition of a stimulus.