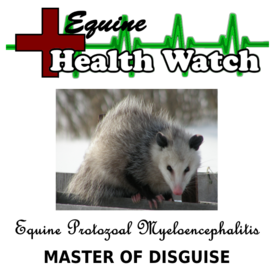 Perfecting Your Way to a Blue Ribbon

Transitions - All patterns begin with a transition or gait change. The simplest is, of course, a halt-to-walk transition. However, if the pattern starts out at a trot or canter, the judge will be observing the number of steps it takes for the horse to achieve that gait. When analyzing the pattern, competitors should consider their own limitation. A halt-to-trot or halt-to-canter transition demonstrates a higher degree of difficulty or skill level and will be scored higher if the maneuver is performed smoothly and accurately. However, mistakes such as picking up the incorrect lead or diagonal or having a jumpy start will cost the competitor points.

Throughout the pattern, the competitor will also be asked to make additional gait transitions. In addition to making smooth transitions, they should be carried out at the location pinpointed on the pattern. If this point is marked by a cone, the gait change should occur as the horse is passing the cone. In Diagram B, note the trot to walk transition asked for while executing the circle. This transition should occur exactly halfway around the circle. Diagram C, however, illustrates the gait change is to be made prior to the cone.

Halts - Ideally, halts are performed smoothly, squarely and without any signs of resistance. These would include gaping at the mouth, raising the head or tucking the nose in too far, stopping crooked, not stopping completely, stepping sideways, or fidgeting. Many times, a halt depicted on the illustrated portion of the pattern is also accompanied by written instructions, such as "Stop even with the cone." At other times, a halt is implied. For example, the illustrated pattern may not have a symbol for the halt and the written portion may simply say "Trot to the judge and set-up." Correlating the illustrations with the written instructions will give the competitor a clearer picture of the pattern.

Figure Eights and Serpentines - In showman's terms, a figure eight is comprised of two equally-sized circles that intersect at a single point. A serpentine is a series of half circles that connect as they "cross over" an imaginary center line. These figures should be ridden as close as possible to this ideal while still maintaining a smooth cross over point. Judges often include these figures to test the competitor's ability to make lead changes when cantering or to switch diagonals at the posting trot. Unless otherwise noted in the pattern, lead and diagonal changes should occur precisely at the point where the two circles intersect in the case of a figure eight or where the half circles meet the imaginary line for a serpentine.

Unless the pattern specifies the type of lead change, competitors should perform the most advanced change they can skillfully accomplish. A properly executed flying lead change will impress the judge more than a well-done simple lead change.

Turns and Pivots - Unlike corners and circles, turns and pivots lack forward motion. In the pivot or turn on hindquarters, one foreleg will cross over the other and the opposite hind leg will be remain in the same location as the pivot point. With a turn on the forehand, the opposite is true. The hind legs move laterally, while the forelegs remain in the same location. The highest scoring turns and pivots will be those that are performed as one fluid motion, without pauses between each step. The horse's body will remain straight and the pivot foot will be planted in the same spot throughout the maneuver. When performing turns and pivots, care should also be take to not over or under turn. Doing so can place the competitor in the incorrect orientation to perform the next segment of the pattern.

Showmanship Set-up - There are several times during a showmanship class where the exhibitor will be asked to "set-up" the horse. These include the wait at the start of the pattern, while in the line-up after completing the pattern and when asked to stop in front of the judge for the inspection during the pattern.

The set-up position will depend upon the breed of horse and the discipline. Stock horses shown in western tack are expected to stand squarely with all four legs perpendicular to the ground. Hunter-type horses shown in a bridle and some breeds, like the Arabian, will place one hind leg slightly behind the other. Saddle seat horses are usually parked out with the hind legs extended farther back.

When setting up in front of the judge, it is essential to begin the maneuver by stopping an adequate distance from the judge. The judge shouldn't feel compelled to step back to maintain a safe distance from the horse. Nor should the judge need to take more than a couple steps when he begins his inspection.

The set-up should appear relaxed and natural. Rushing at this point will give the judge the impression that the showman lacks confidence. Likewise, it's far better to take a few extra seconds to get the set-up perfect than to have the horse's feet offset, too wide apart or too close together. Once the set-up is complete, the showman should turn and look at the judge. A natural smile is often much more appreciated than a forced, toothy one.

After the set-up, the judge will walk around the horse for the inspection. The proper protocol is for the horse to stand still and for the showman to cross over in front of the horse using the quadrant method. This allows the judge a clear view of the horse at all times. Once the judge has indicated that the inspection if over, the handler should return to horse's left side. Often, showmanship patterns end at the judge. The handler will then proceed to the line-up.

Figure eights and serpentines are popular patterns among judges wishing to test the competitor's ability to change leads and diagonals.

When scoring pattern work, judges are looking for the competitor who maintains the highest degree of precision and accuracy throughout the performance. In addition to executing each element of the pattern correctly, the judge will be looking at the overall performance with emphasis placed on a consistent speed. Ideally, it should appear as if the competitor flows easily from one maneuver to the next. This type of performance never appears rushed, nor will the horse move snail-like around the arena.

The key to success in a pattern class is often linked to the work done beforehand at home. Incorporating these skills into one's normal riding routine and practicing them daily will not only add precision and polish to one's show performance, but will also give the competitor the confidence necessary to win! 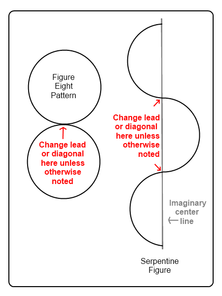 Start - To keep the horse show moving along, many judges will have the exhibitors walk their horses to the "start" and wait quietly while the previous exhibitor is performing the pattern. From this point, the judge will form his first impression of the competitor. Thus, it's essential to begin the pattern in the correct location.

Likewise, starting from the wrong side of the cone, skews the alignment between the horse and the judge. As illustrated in the diagram, the horse will not be perpendicular to the judge as he moves away from the start. This makes it more difficult for the judge to determine if the horse is trotting in a straight line. 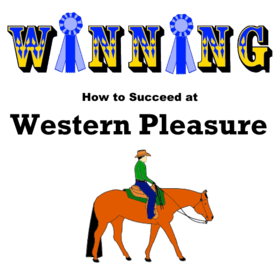 Backing - Since most horses don't relish backing, this is one maneuver that can really get competitors off track in their pattern. When a horse resists the command to back by stepping sideways or backing crooked, it can put the horse in a difficult position to correctly perform the next maneuver in the pattern. When analyzing the pattern, always consider what skill is being asked next and where the horse needs to be in order to perform that task.

Corners and Circles - Circles are round, corners are square. While that may seem simplistic, making geometric figures can be challenging. Far too often, circles end up as ovals and the lines forming a corner aren't perpendicular to one another. Looking ahead and visually planning the path can greatly improve the overall shape of these figures. Likewise, it's preferable to maintain the same speed and cadence when entering, leaving and throughout the turn or circle. The exception, of course, is if the pattern indicates a gait change within the figure.

Note the starting position in this pattern is to the left of the cone. Failure to start in the correct place can lower your score.

When analyzing a pattern, pay particular attention to the designated location for gait transitions. 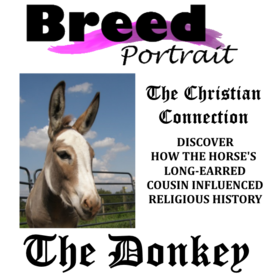 In this segment of a pattern, the judge is asking for the walk-trot transition to be made before the horse begins the turn.

Pattern classes can be some of the most challenging classes you'll encounter at a horse show. Basically, they are maneuverability tests that can include any number of gait transitions, changes of direction, stops and pivots. Not only will you and your horse be called upon to demonstrate these skills, but you'll have little, if any, time to prepare.

Horse show patterns can be found in many types of classes, including showmanship, equitation, and horsemanship. While the competitor's overall score in these classes is based upon several criteria, the competitor's ability to correctly execution the pattern is almost always essential for winning or placing. So let's take a look at some ways to improve your performance and perfect your pattern in the show ring.

A pattern is essentially a map that dictates the judge's instructions as to where, when and how the horse is to be moved around the arena. While many patterns may seem fairly straightforward, judges often include very specific details for each maneuver. These instructions can include the number of steps to take, which direction to pivot or from which side an obstacle should be approached. It's essential to understand that the pattern is not merely a suggestion, but rather an exact map that is to be executed precisely. So the best way to insure one is performing a pattern correctly, is to break the pattern down into its individual components and study each one carefully.

In this scenerio, the correct pattern is illustrated on the left. The right side depicts how the pattern can get skewed when the horse backs crooked. Note the placement of the circle in relation to the cone.

PULLING IT ALL TOGETHER 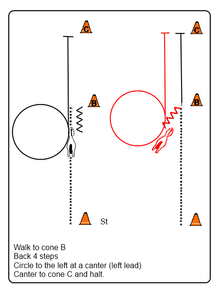 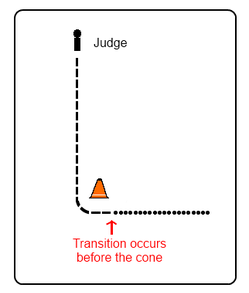 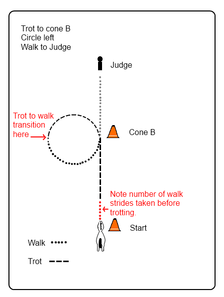 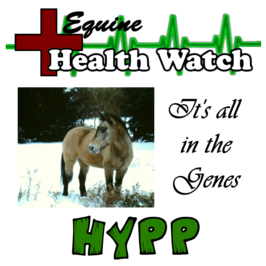